In order to facilitate residents and visitors and reduce environmental pollution caused by emissions and fuel consumption for the whole city, Da Nang is collecting opinions from people and visitors on smart bicycle development project. 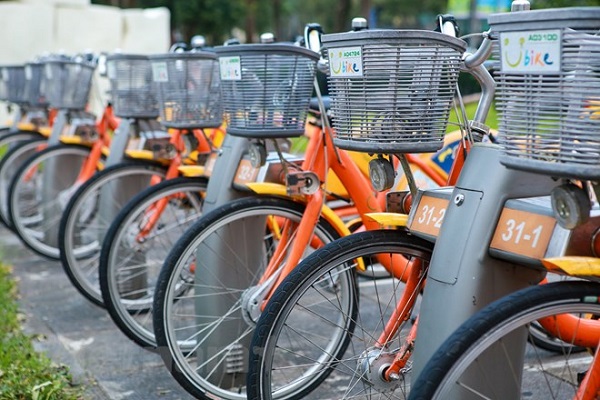 Danang public bicycle service serves tourists and local residents
In recent years, Da Nang city has experienced strong development, urban landscape has changed a lot. However, along with its economic development, population, living conditions and income, there is an increase in urban problems such as travelling demand, number of personal vehicles, traffic jam through peak hours as well as parking violations in many roads.
In order to better support the public transport system, the City’s Department of Transport has studied a pilot project to develop public bicycle services in the central area of ​​Da Nang city. More specifically, the Department have collected opinions from its residents and visitors to analyze and assess the demand for bicycles and desired routes.
Accordingly, the Da Nang City’s Department of Transportation has provided a form to collect its residents and visitors’ opinions on this project. The contents of the form includes a number of issues such as personal details of those giving opinions; expected routes; payment methods; Quality of service and suggestions.
Mr Bui Hong Trung, Deputy Director of the Da Nang City’s Department of Transport, said that the Department is expected to get the opinions within 1 month. After sufficient quantity of the formed is collected, the Da Nang city’s  Department of Transport will consider and submit to the City People's Committee for approval of the project.
Da Nang is known as the largest economic, cultural, educational, scientific and technological, tourism center of the Central - Highlands region of Vietnam. However, along with the achievements, the speed of urbanization is increasing, tourism growth rate has increased sharply, leading to an increasing population density and related issues such as environmental issues and traffic jam, etc.
According to traffic experts, the growth rate of personal motor vehicles is increasing (automobiles increase by 12% /year on average and 10.5%/year for motorbikes), in period 2016-2020. In Da Nang, traffic jams will appear rapidly after 2020; At the same time, it will become serious if the city does not have sustainable traffic management and development policies.
Along with solutions to develop public passenger transport network, control and limit the increase of personal motor vehicles, the Da Nang’s Department of Transport is conducting research on pilot project of service development. Public bicycles in the city center area provide a kind of cheap and convenient transportation, increasing connectivity, enabling people to access buses more conveniently, gradually replacing habits using personal motor vehicles, contributing to reducing traffic jam in the center area, minimizing the environmental pollution caused by gas emissions and fuel consumption for the whole city.
In the first phase, Da Nang is expected to invest about 30-40 locations, each with 5-10 bicycles depending on expected demand, prioritizing the locations on key roads, near bus stop stations to connect to the public telecommunications system, between places to visit in the city and in most densely populated areas.
Roads with priority for placing bicycles and building infrastructure and dedicated bicycle lanes include: Bach Dang, Tran Phu, Tran Hung Dao, Vo Nguyen Giap, Nguyen Van Linh, Hung Vuong, Le Duan, Pham Văn Đồng, Vo Van Kiet, Nguyen Van Thoai.
Tags: Danang Danang City smart bicycle Public bicycle